Since the summer of 2019 Olitog arranges business trips to the Swiss alps. The trips make it possible for the company and its co-workers to develop in an inspiring and relaxed atmosphere, meet new business contacts and trying team building activities in a spectacular environment.

Together, we customize your trip according to needs, budget and adventurousness.

After arriving at the airport of for example Zurich or Milan, or by train, you will be met by Olitog and transported to the village Zouz in the Engadin valley in the canton of Graubünden in most southeastern Switzerland.

Between the mountaintops you get the liberated feeling of being isolated from the world, although cities as Zurich, Milan and Munich are only a couple of hours away. The area is one of the most exclusives in Switzerland, not the least shown in many of the restaurants. But there is more than fancy jet set-life in Sankt Moritz. In the small villages people live close to each other, on the hill sides alp cows are grazing and many of the inhabitants are entrepreneurs producing meat, cheese and other products.

You will be accommodated in a hotel in Zuoz and will be properly looked after by the staff while you can concentrate on feeling good, socializing and working creatively. 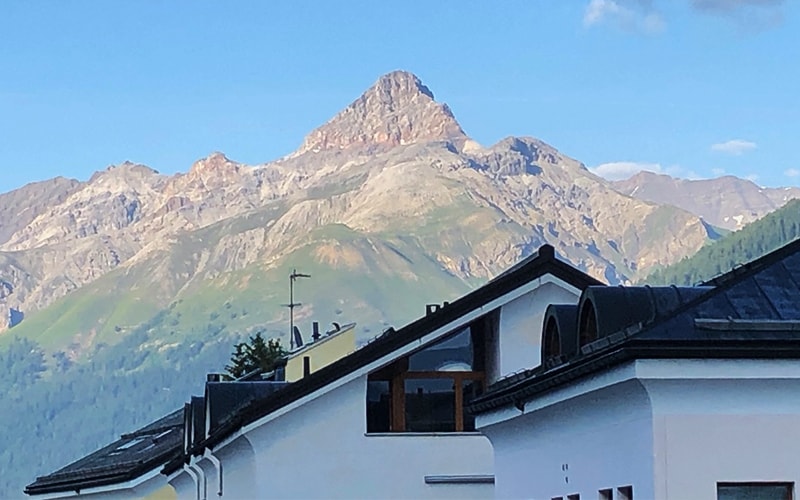 During your visit in Zuoz a meeting or conference room will be available for you in the village. If you wish to arrange business meetings or lectures without leaving the valley, we’ll find a proper location for that as well.

If you wish to visit companies in Northern Italy, Germany, Austria and Switzerland a daytrip by car or bus can easily be arranged. The trip through any of the mountain passes with its spectacular views is a treat by itself!

Engadin offers a large amount of varied activities at different costs. What they have in common is that they all will bring you closer to both the nature and each other. Of course, we´ll find the most ultimate activity for your particular group.

A hike in the mountains along serpentine roads and paths is almost obligatory when visiting Engadin. All our alternative routes are adapted to anyone with basic fitness.  You can do the hike either by yourselves in the group or bring a proficient guide that shows local attractions. At the break we eat from our lunch pack and enjoy the view.

If requested, we choose a “flatter” alternative. Why not a hike around the wonderful Lake St. Moritz?

Perhaps the valley is most famous for its downhill skiing. Both in 1928 and 1948 the Olympic Winter Games were held in Sankt Moritz. Alpine World Ski Championships has been held here four times, most recently in 2017, and The World Cup visited the valley as late as 2018.

For those who choose skiing as an activity, the three ski systems Corvatsch, Corvuglia and Diavolezza-Lagalb offer 63 slopes with 350 kilometers (220 miles) of skiing and 43 lifts. The highest fall height is over 1 400 meters.

In the area there are plenty of alternatives for those who prefer to get their nature experience on a bike. You could for instance rent a mountain bike and choose from 40 kilometers of marked lanes in the mountains, some of them starting from mountaintops that you reach by cable cabin. As an alternative you could discover the beautiful valley further by rented road bikes, commuting bikes or e-bikes.

In a secure manner, guided by a proficient instructor, we begin the climb up the mountain. Collaborating with your friend and focusing on the task you get a chance to release your everyday thoughts and doings. Do we need to mention that the view is unbeatable?

As in the climbing activity, we use a proficient instructor who puts security first. Glacier climbing is considered a dangerous extreme sport, but under the right conditions it´s a fantastic experience, not least in this environment.

Established in 1893, The Engadin Golf Club is the oldest golf club in Switzerland and one of the oldest in Europe. Play an 18-hole round on a high-quality golf course with a wonderful view. In the Bodmer Performance Center you can get your swing characteristics analyzed thanks to the use of high-tech devices.

By helicopter, you get the spectacular bird-eye-view of the valley. The length of the trip varies and can be customized according to your schedule and your budget.

When the wind meets a mountain, the air is deflected up the windward face of the mountain forming lift. This makes Engadin a perfect place for gliding and paragliding. In 1948, the world championship in gliding took place at Samedan Airport. Today the local club offers gliding passenger flights above the mountains.

Not far away, in Pontresina, the paragliding club offers tandem flights for an even closer to nature flying experience.

Equipped with snowshoes you get an out of the ordinary nature experience. The snowshoes make it possible to walk even in rough terrain and get closer to nature than on skis or with regular shoes. In the alps you could compete in snowshoe-racing. The beginner however is recommended to take it easy since the activity is quite exhausting.